Is Australia building to a crescendo?

In the space of three months Australia has completely turned around its prospects of defending its World Cup title. From mid-2017 until March this year, Australia won just four of its 26 ODIs. The nadir during that period was a 5-nil loss to England in England in June last year.   Twelve months on, Aaron […]

The Sardar Patel Stadium in Ahmedabad in the state of Gujarat is a venue with a proud history in Indian cricket. It was at the ground in 1987 against Pakistan that Sunil Gavaskar became the first batsman to surpass 10,000 Test runs. In 1994, Kapil Dev broke the world Test wicket record, surpassing Richard Hadlee’s […]

Episode 11 of ‘Great Sporting Lives’ ... the incomparable Shane Gould ... a triple Olympic gold medallist at the age of just 15 🏊‍♀️

Watching two very rare ODI talents at the crease at the same time.

Love watching Rohit Sharma in ODI cricket ... not so sure the AUS team does ... his eighth one-day century against them and an average of 63 in 40 games v AUS 👏🏏 #INDvAUS 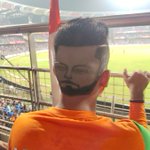 Just seen that Harry & Meghan are getting divorced from the Royal family.

Surprised it hasn’t had more coverage.